Through the Every Day Counts effort on implementing quality environmental documentation, the Federal Highway Administration is encouraging the highway community to simplify and expedite the development of National Environmental Policy Act documents for construction projects. 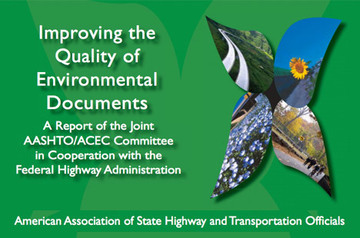 The EDC effort promotes recent best practices and earlier improvement efforts, including recommendations from Improving the Quality of Environmental Documents, a report developed by the Joint American Association of State Highway and Transportation Officials/American Council of Engineering Companies Committee and FHWA.

Other useful tools on environmental documentation include FHWA's Environmental Streamlining website and the AASHTO Center for Environmental Excellence Practitioner's Handbooks.

The Idaho Transportation Department has won an engineering excellence award from the American Council of Engineering Companies of Idaho for its first design-build project.

The project to reconstruct Idaho 44 from Linder Road to Ballantyne Lane involved widening the highway from three to five lanes, improving the Idaho 44/Linder Road intersection and adding two through lanes in each direction.

In a news release, the Idaho agency said design-build "allowed the design and construction teams to work together under a single contract with the department."

Michigan to Use Precast Bridge Elements

The Michigan Department of Transportation has awarded a $21 million project to rebuild the U.S. 131/I-94 Business Loop interchange. The interchange provides access to Western Michigan University, so construction will be limited to summer breaks and staged over two seasons, one for road work and another for bridge work. To accelerate construction of the flared bridge, the pier and abutments will be constructed with precast concrete elements. The Michigan DOT will use FHWA Innovative Bridge Research and Deployment Program funds to help implement this technique for shortening project delivery.

More than 80 people turned out for an April 30 showcase on geosynthetic reinforced soil integrated bridge system technology at PR-2 in Yauco, Puerto Rico. The event was sponsored by the Puerto Rico Highways & Transportation Authority, the Puerto Rico Transportation Technology Transfer Center and FHWA. It was the first use of GRS-IBS on a high-volume freeway, so the project includes installation of movement-monitoring devices and data collection to evaluate the structure. The showcase featured a session on the design aspects and construction challenges of the project. Participants visited the project site to observe the GRS-IBS construction process.

In an April 28 ceremony in the governor's office, a team from the Washington State Department of Transportation, National Marine Fisheries Service and FHWA received the FHWA Environmental Excellence Award for successfully implementing a new programmatic agreement for Endangered Species Act Section 7 consultations. The agreement is expected to cover 70 percent of Washington State DOT projects requiring Endangered Species Act consultations. At the presentationÃ¢â‚¬”part of a briefing for state officialsÃ¢â‚¬”the team shared successes resulting from 10 years of collaboration on the Endangered Species Act.

A geosynthetic reinforced soil integrated bridge system built by the Delaware Department of Transportation in 2013 is featured in the April 2014 American Society of Civil Engineering's Civil Engineering magazine. The article illustrates the value of the technology in accelerating bridge construction and FHWA interim design guidance. The project included one of the first Every Day Counts showcases offered by FHWA's GRS-IBS deployment team.