Ten states have institutionalized stakeholder partnering, which involves forming stakeholder groups that collaborate to improve the local public agency program by clarifying state and federal requirements and identifying opportunities for streamlining. More states are developing groups, and stakeholder partnering will continue as an Every Day Counts innovation in 2015 and 2016.

One state with a stakeholder group is Ohio. Launched in 2014, the Ohio Local Public Agency Advisory Group brings together local, state and federal partners to discuss policies and procedures related to the Ohio Department of Transportation's local-let program. Its purpose is to improve performance on projects through information sharing, streamlining efforts and training.

Colorado officials gathered December 4 to celebrate completion of the I-70 Eagle Interchange upgrade project. Four traditional intersections were converted to roundabouts and pedestrian mobility was improved with a mile of sidewalks and multiuse paths, including a pedestrian bridge over I-70. The project used the construction manager/general contractor delivery method to improve constructability, cut costs and construction risk, and integrate construction phasing that allowed efficient traffic movement and an accelerated construction schedule.

The Maine Department of Transportation and FHWA have executed the TIGER VI grant agreement for the Sarah Mildred Long Bridge project, which is using the construction manager/general contractor delivery method. The $158.5 million project will replace the movable bridge that carries vehicular and rail traffic between Kittery, Maine, and Portsmouth, New Hampshire. The $25 million grant will be used to pay for the rail element of the new bridge, which serves the Portsmouth Naval Shipyard.

The New Mexico Department of Transportation has constructed the first project of a warm-mix asphalt experiment under the Long-Term Pavement Performance program, which collects pavement performance data across North America. The project is on I-40 east of Albuquerque. FHWA will test cores collected from the project immediately after construction and again at six, 12 and 18 months. FHWA continues to recruit test sections for the warm-mix asphalt experiment, which provides highway agencies with an opportunity to learn about the long-term performance of various warm-mix asphalt technologies. Contact Jack Springer at (202) 493-3144 for information. 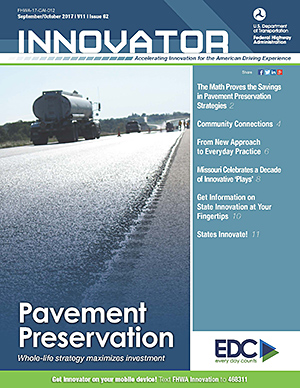 Read the new issue of Innovator to find out how New Mexico and other states used State Transportation Innovation Council incentive funds on activities to standardize innovations. Also, read about the latest round of Accelerated Innovation Deployment Demonstration awards highway agencies will use to deploy proven technologies and practices to save time, money and lives.