Innovation of the Month:

One focus of the EDC-4 DDSA team is local road safety plans (LRSPs), which identify, analyze, and prioritize safety improvements and strategies for local roads. The team partnered with the National Association of County Engineers on a pilot project to help 25 counties in California, Colorado, Florida, Nevada, Ohio, and Wisconsin develop LRSPs tailored to local issues and needs.

The pilot provides agencies with a blended learning experience that includes technical assistance, a series of webinars, and a hands-on workshop to help participants develop a draft LRSP. As counties in a State develop plans, they share their experience with peers in other counties and encourage them to invest time in developing their own plans.

View a webinar on DDSA for local roads.

See a library of DDSA resources.

Contact Jerry Roche of the Federal Highway Administration Office of Safety or John McFadden of the FHWA Resource Center for information, training, and technical assistance.

In a first for the State, the Oklahoma Department of Transportation (ODOT) used self-propelled modular transporters—computer-controlled vehicles that carry large structures and position them precisely—to install two railroad bridge spans over I-235 in Oklahoma City over a weekend. Using accelerated bridge construction to build the bridge truss structures near the interstate and move them into place greatly reduced the impact on traffic, requiring a road closure from Friday night to Monday morning rather than for several months if traditional construction methods were used. ODOT used DOT and railroad coordination best practices on the project, including working with one point of contact at BNSF Railway, conducting regular meetings on project status, and creating a flow chart for the document submission and approval process to enhance efficiency. The bridge is part of a reconstruction and widening project on I-235. For information, contact Souzan Bahavar of the FHWA Oklahoma Division.

See the Latest Issue of Innovator 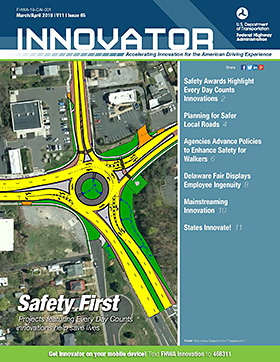 Read the new issue of the Innovator newsletter to learn how projects using EDC innovations are enhancing safety and saving lives on the Nation’s roadways. Also, read more about the local road safety plan pilot to help local agencies invest their safety dollars strategically, as well as State and community efforts to deploy strategies to improve pedestrian safety at uncontrolled crossing locations.