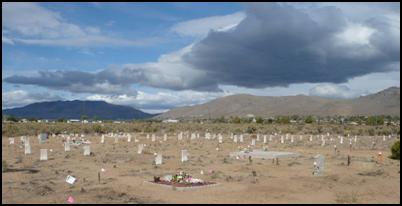 The Nevada Department of Transportation (NDOT) has been working on the US 395 Carson City Bypass Project. This project will build a new four-lane highway around Carson City, Nevada. During the Section 106 process, NDOT's Environmental Division identified the "Old Stewart Indian Cemetery" as being eligible for the National Register of Historic Places. The cemetery had been active up until 1940. It contains the graves of Native American alumni, relatives, and children who died while attending the Stewart Indian Boarding School.

The Carson City Bypass would be constructed within 1,000 feet of this cultural site and have an adverse visual impact on the cemetery scenery. Normally, the required mitigation process would have been dealt with through a grey-literature report filed at the State Historic Preservation Office. This report would have fulfilled the obligation but would not have been of any benefit to the community or the historic cemetery. Instead, NDOT turned the opportunity for mitigation into a creative outreach and education partnership with the Washoe community.

Involvement of the Washoe Tribe of the Steward Colony Youth was a very important aspect of the project. Professional hands-on training for cemetery documentation was provided by NDOT's archaeology section. In exchange for their volunteer assistance with the project, members of the Washoe community photographed and repaired grave markers of the cemetery. Over 50 volunteers from the Washoe tribe and the Stewart Colony Youth Group participated. Children ranging from second grade to high-school came to help care for the graves of their relatives and ancestors. Young children helped by carting off overgrown sagebrush and teenagers learned how to use a single reflex camera to document graves, re-set and repair broken markers with the instruction of a stone mason, and record inscriptions and evaluate grave marker conditions. The elders or the Washoe tribe attended as well, closely watching their children and grandchildren remake the burial site.

The cost of the Old Stewart Indian Cemetery Clean up was minimal due to volunteers and donated supplies. Furthermore the benefits of increased good will and trust between the Washoe community and NDOT were far more significant. The Washoe wish to make the Old Stewart Indian Cemetery Clean Up an annual event for their community and to use the skills and knowledge shared in this project to document and preserve other historic Native American cemeteries in the area. NDOT hopes that this successful partnership between a DOT and a Native American community will inspire other DOTs to look for creative mitigation opportunities that will have a lasting benefit, both to the people in a community, and to their historic resources.