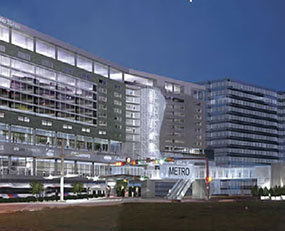 Joint development is most common at transit stations. The public agency that either owns an asset or is undertaking an improvement may solicit the involvement of a private sector partner. Alternatively, a private enterprise that owns land or a building may seek to partner with a public agency to develop transportation enhancements that will benefit their property as well as the traveling public. Joint development projects are generally beneficial to both parties and may lead to increased revenue for real estate owners, decreased costs for operating or construction public transportation systems, increased transit ridership, and enhanced amenities for transit riders. Common joint development arrangements range from air-rights development to ground leases, station interface or connection improvements, cost sharing arrangements, and incentive agreements. In addition to transit, joint development agreements have also been used in the implementation of highway improvements and parking projects. 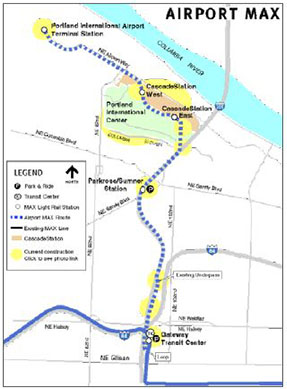 The 5.5 Airport MAX extension of Portland's existing Red Line light has four stops and brings passengers from downtown to the airport in 38 minutes.1 This project was a partnership between Bechtel, a private contractor; the Port of Portland; the City of Portland; and TriMet, the Portland region's transit agency. The project began as a result of an unsolicited offer by Bechtel to implement the airport extension 10 years ahead of its planned schedule. The three public organizations formed a working group and negotiated the following cost sharing responsibilities together with Bechtel. The City of Portland contributed $23.8 million toward the light rail construction to pay part of the cost of a 2.9-mile segment using tax increment financing bonds. TriMet contributed $45.5 million toward the same segment using monies from its general fund which is primarily funded through a .64% payroll tax and self-employment tax. The Port of Portland, which operates the Portland International Airport, was responsible for the development of the rail station inside the airport terminal as well as a 1.2-mile rail segment leading out of the airport. Its $28.3 million contribution was funded through a Passenger Facility Charge of $3.00 for passengers departing from Portland.

The city, transit authority, and port also agreed to bypass the requirements for a competitive bidding process and awarded Bechtel a sole-source, $125 million design-build contract for the construction of the light rail extension. In addition, Bechtel received $500,000 from each of the three agencies for preliminary engineering studies, which Bechtel also matched.

In addition, the Port gave Bechtel the development rights and an 85-year lease to 120 acres of land in the Portland International Center to create a development which would be known as Cascade Station and include two stops on the Airport Max line. In place of rent, Bechtel paid for a 1.4 mile segment of the rail line, including two stations and an overpass, at a cost of $28.2 million. Bechtel also negotiated for an option to renew the lease at market rents for 14 years following the initial period, making the lease term 99 years. Bechtel partnered with Trammel Crow, a real estate development company, to develop Cascade Station. The two companies formed the Cascade Station Development Company. Trammel Crow brought real estate development experience to the partnership, and took on the primary role in developing and leasing the Cascade Station development. TriMet is responsible for operating and maintaining the Airport MAX Red Line extension.

West Dublin/Pleasanton San Francisco Bay Area Rapid Transit (BART) station is in the median of I-580, near the freeway's junction with I-680. It is the first infill station for the system and fills what had been a 10-mile gap between Castro Valley and Dublin/Pleasanton stations in the far southeast section of the region. 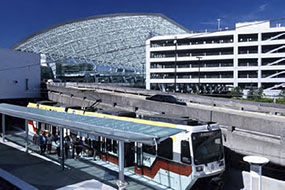 In November 1999, BART and Orix Real Estate Equities and Jones agreed to enter public/private venture to build the West Dublin/Pleasanton station in Alameda County. The station is located in the median of I-580 near the junction with I-680 and is an infill station filling what had been a 10-mile gap between the Castro Valley and Dublin/Pleasanton Station. Jones Lang LaSalle contributed $20 million towards the $106 million station and planned to construct 210 housing units, office space, and a hotel within walking distance. An additional $6.9 million was provided by the Alameda County Congestion Management Agency and $4 million from grant from the Tri-Valley Transportation Council. The remainder of the cost was covered by bonds issued by BART leveraging a combination of long-term lease proceeds from private developers, BART fare and parking revenues generated at the station, and taxes generated by the new private development on BART land collected by the cities of Dublin and Pleasanton.

Joint development projects are public transportation improvements that are co-located with commercial, residential, mixed-use, or other non-transit real estate development.