Solar photovoltaic technology provides a promising option for deriving value from highway rights-of-way and other land owned by state DOTs. Solar power installations can be sited on or above highway alignments and interchanges, rooftops, or elevated structures above parking lots or other DOT owned facilities. Solar power projects can reduce state DOT energy costs and generate new revenue streams from private-sector developers who pay to use state-owned land. They also allow DOTs to tap into other federal, state, and local incentives associated with the generation of clean, renewable electric power.

There are three development models that state DOTs have used to develop solar power facilities:

Direct Procurement and Ownership
With the direct procurement and ownership model, the state DOT procures and owns the solar energy system for its useful life. The state DOT also uses the electricity that the system generates and sends any excess power to the grid. The state DOT receives a return on its investment by reducing the amount of energy it purchases and reaps any benefit of net-metering credits if excess production is sent back to the grid.

Third Party Ownership
With third-party ownership, the solar power system is financed, built, owned, operated and maintained by a private partner. Solar developers may include national companies or smaller local groups. The most common third-party ownership arrangement is a power purchase agreement (PPA). With PPAs, the state DOT purchases power from the private partner. The energy is purchased at an agreed-upon rate per kilowatt-hour, which is set below normal utility rates providing a cost savings to the DOT.

The third-party ownership model is often appealing becomes the state DOT does not incur up-front capital expenditures. In addition, private owners can also access the different federal, state, and local tax incentives available to renewable energy system owners. Unlike the public sector, private developers must pay taxes on the income derived from the solar facilities, so the tax incentives enable them to derive greater value from their investment than what would be available to a state DOT.Â  This, in turn, allows the private partner to sell the electric power generated by the solar system below the effective rate a public agency could achieve through direct ownership.

Hosting a Third-Party Developer
With the third-party developer model a state DOT allows a third-party developer or utility to install and operate a solar power system on its property. Also known as hosting, with this type of arrangement the electricity flows to either an external offtaker or the grid. The state DOT essentially serves as the landlord for the system, with the system owner making lease payments to the state DOT over the length of the lease. In most cases, the state DOT would not have any obligations beyond allowing the owner to access, operate, and maintain the system. This model may be a good choice for state DOTs that have land that is well suited to solar power generation but not proximate to DOT facilities necessitating electric power. 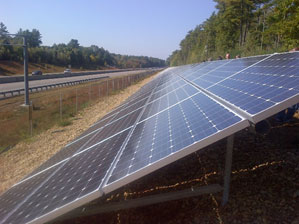 The projects serve as a reliable source of value to MassDOT, providing both energy cost savings and lease revenue, while supporting agency and state goals. The PPA rate the state pays for the electricity from a project is less than it would pay if it purchased the power from local utilities. These energy savings are projected to be at least $15 million over the 20-year contract period. Should retail prices of energy rise above what is anticipated, then MassDOT's savings will increase further. Based on its positive experience from its initial solar projects, MassDOT has additional solar installation under development.

In 2012, the E-470 Public Highway Authority completed one of the largest solar power projects located in a highway right-of-way in the United States. The project consists of 22 sites along a 17-mile stretch of the 47-mile orbital corridor around Denver, CO.

Twenty-one of the sites provide power to road surveillance cameras, streetlights, variable message signs, toll-collection equipment, toll plazas, and maintenance facilities along the corridor. The last site is located at the E-470 Administrative Headquarters, where an array of panels is installed on the roof and directly powers the building. Any excess power is sent to Xcel Energy's electricity grid.

The E-470 Authority developed the project on a P3 basis, executing a 20-year solar PPA with Adamas Energy Investments (now C2 Energy Capital). The 20-year PPA locked down a fixed energy cost rate of 6.13 cents per kilowatt-hour for the first 6 years and then established a fixed annual increase for the remaining 14 years. The PPA rates are lower than the comparable rates available from Xcel Energy. Adamas Energy provided $2.8 million in capital funding for the project and retained $750,000 in federal tax credits and $180,000 in Xcel Energy rebates. 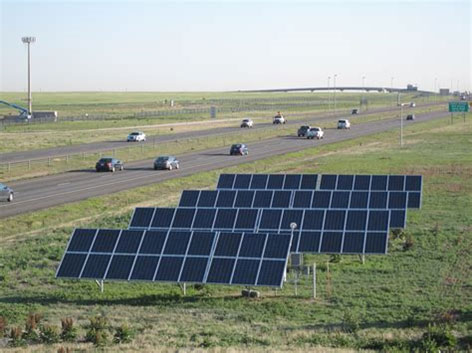 Solar energy systems can be located on or above many DOT-owned properties including rights-of-way, rest areas, parking lots, and rooftops

Private partners can access tax incentives that are not available to government entities, providing additional value to public project sponsors