Transportation Reinvestment Zones (TRZ) are designated areas located around transportation projects created to encourage development and capture property tax increments to help fund the improvements. TRZs can be used to capture both present and future economic growth created as a result of the transportation improvements and they may be used in conjunction with other value capture methods. TRZs do not raise tax rates. Rather, they allow sponsors to issue debt by leveraging new property tax revenues generated within the TRZ. In order to be designated as a TRZ, the land involved must be underdeveloped and receive direct benefits from the transportation improvement. Benefits may include improved access, public safety, and congestion reduction. Unlike tax increment financing, TRZs do not normally necessitate a board of directors. TRZs are a useful tool that can be used to support a broad range of transportation projects.

Although there are differences in state legislative requirements for establishing and operating TRZs, they generally follow the same framework:

Depending on the state, there are different mechanisms used to collect funds generated by TRZs. Texas uses a pass-through financing program, requiring communities to pay some project costs up front. This money is repaid from future revenues generated by the TRZ. In Texas TRZs may be established at the municipal or county level. Municipal TRZs are established by a city with the tax increment defined as the value captured multiplied by municipal property tax rate. County TRZs are set up with the county and define the tax increment as the value capture multiplied by the county's annual property tax.

In 2008, the City of El Paso established the first TRZ in Texas to support the development of I-10 and Loop 375 highway projects. Over the course of its lifetime, the TRZ is expected to generate about $70 million in funds from the areas surrounding the highways. The TRZ set 2008 property tax levels as a baseline and uses any incremental tax revenue to support the development of the highways, which are also an important part of El Paso's comprehensive mobility plan. 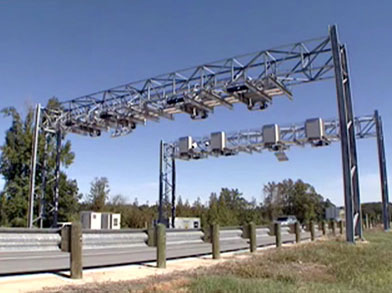 In Smith County, Texas, a TRZ was established to help fund the expansion of the Lindale Relief Route portion of Toll 49 being developed by the North East Texas Regional Mobility Authority (NET RMA - a local toll authority). NET RMA established the TRZ and is directing 50% of the incremental tax revenue to the Toll 49 project and the remaining revenue for other County needs, including maintenance and improvements of the Smith County road system. Based on its initial financial studies, NET RMA forecast that the TRZ will generate between $12.9 million and $16.9 million annually over the next 25 years to support the Toll 49 project. If the TRZ fails to meet those forecasts, NET RMA will use other funds to support the Toll 49 project. If the generated revenue is much less than projected, Smith County is not liable for the difference or for any debt assumed by NET RMA.

In 2013, Hays County, Texas approved its first TRZ to support the construction of FM 110, an 11.25 mile highway in San Marcos, to the southwest of Austin. The project will encourage growth on the eastern side of I-35 and relieve traffic form the contested I-35 corridor. Hays County plans to allocate 50% of the tax revenue generated from the TRZ to repay $48 million in debt leveraging future tax proceeds. The city of San Marcos anticipates that tax proceeds could increase by as much as $71.3 million in the project area. Once the debt has been repaid, the city and county can terminate the TRZs and retain all the incremental property tax revenue.

TRZs can be used to capture both present and future economic growth created as a result of the transportation improvements, and they may be used in conjunction with other value capture methods.