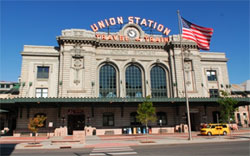 The project is funded with a unique financing structure and for the first time combines credit assistance from both programs.

The loans are being awarded to the Denver Union Station Project Authority (DUSPA), a non-profit, public benefit entity formed by the city in July 2008, through a partnership with the Regional Transportation District (RTD), City and County of Denver, Colorado Department of Transportation, Denver Regional Council of Governments and Denver Union Station Metropolitan District.

"This project epitomizes the importance of livability principles to promote transportation mobility and strong communities," said Secretary LaHood. "Not only will Union Station be the centerpiece for the Denver regions multi-modal transportation system, it will serve as a magnet and anchor for residential, retail and commercial development."

The redevelopment project is a 50-acre public-private mixed-use development located in lower downtown Denver. The loans will finance new intermodal transportation facilities which include an underground bus terminal with 22 bays, a light rail terminal consisting of three tracks and two platforms for existing and planned routes and an intercity and commuter rail facility consisting of eight passenger tracks, platforms and service and storage improvements. Also included are the extension of the 16th Street Mall and the Shuttle service, accommodation of the Downtown Circulator service, as well as pedestrian improvements and improved street and replacement parking and utility infrastructure. Integration of these services will provide travelers seamless connections and access to public spaces.

Since 2000, downtown Denver has averaged 6.6 percent annual growth. The project will have an immediate positive benefit on the economy and it is estimated that the Denver Union Station public sector investments will create over 7,000 new jobs during construction. Completion of construction is expected to take four years.

Together the TIFIA and RRIF loans constitute approximately 58 percent of all funding sources for the project. Under the financing plan, an RTD bond as well as tax increment revenues pledged to DUSPA will be used to repay the debt. RTD will assist with the construction management of the transportation improvements and will own and operate the facilities after the construction period.

The TIFIA and RRIF loan programs can help advance qualified projects that otherwise might be difficult to finance because of the size, complexity, or uncertainty over the timing of project cash flows.