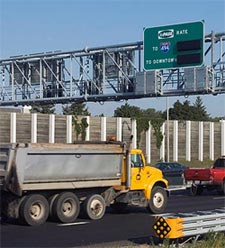 WASHINGTON, D.C. 9/28/09 - Federal Highway Administrator Victor Mendez joined Minnesota Governor Tim Pawlenty and other officials for the grand opening of the I-35W express lanes in the Minneapolis metro area on September 28, 2009. The project is one of the first nationwide to make use of all lanes, including the shoulder, which will provide drivers the option to take a less congested route. "The new express lanes and electronic tolling technology Minnesota is launching today are innovative approaches that will help drivers get to their destination quickly and safely," said Administrator Mendez. "Our goal is to effectively use every inch of pavement so that we have the most efficient transportation system possible."

In total, the U.S. Department of Transportation provided $133.3 million for this project with FHWA funds for lane conversions and tolling technology, Federal Transit Administration (FTA) funds for Bus Rapid Transit facilities and Park and Ride lots, and Research and Innovative Technology Administration (RITA) funds for the operational test period before the lanes open. Additional features along this corridor include electronic message signs informing drivers about congestion conditions and parking availability for public transit users and real-time HOT lane prices.

The MnPASS electronic tolling starts September 30 for I-35W both northbound and southbound from Trunk Highway 13 to I-494 and then again northbound from 42nd street into downtown Minneapolis. The I-35W project is Minnesota's second HOT lanes project - MnPASS I-394 express lanes opened in 2005.