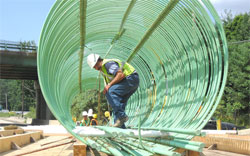 The State of New Hampshire issued its first GARVEE Bond on November 4, 2010. It is using the proceeds of the innovative $80.0 million transaction to fund the expansion and modernization of a 19.8 mile segment of I-93 running north from the Massachusetts state line to the I-293 interchange in the city of Manchester. The project will expand the highway from two to four travel lanes in each direction, replace or repair red-line bridges, and provide three new park-and-ride lots supporting expanded commuter bus service to Boston.

The state usually uses a pay-as-you-go approach to support its highway needs, but given the importance of the I-93 project and its $795 million price tag, the Legislature opted to accelerate the project by using debt to pay for a portion of it. The Legislature has approved the use of $195 million in GARVEE debt to support the project. This includes the initial $80.0 million issued in November 2010 and an additional $115 slated for issue in fall 2011.

New Hampshire's $80.0 million transaction was issued in two tranches. The $20,040,000 million 2010 Series A Bonds were issued as "Build America Bonds" pursuant to the American Recovery and Reinvestment Act of 2009 (ARRA) and will receive subsidy payments from the U.S. Treasury equal to 35 percent of the taxable interest the state pays on them. The Series A Bonds will mature in 2020, 2021 and 2022. With this transaction, New Hampshire joins Ohio, Mississippi and Utah as one of four states to have issue GARVEE debt in the form of Build America Bonds. The $59,960,000 million 2010 Series B Bonds were also issued in hybrid form as "Recovery Zone Economic Development Bonds" under the ARRA and will receive payments from the Treasury equal to 45 percent of the taxable interest paid by the state. They will mature annually from 2022 through 2025.

New Hampshire's GARVEE bonds were authorized through Chapter 228-A of the New Hampshire Revised Statutes Annotated which was adopted by Governor John Lynch and the Executive Council of the State on October 20, 2010. This legislation authorizes the state to issue a total of $240 million in GARVEE debt, with $195 dedicated to the I-93 project and the remaining 45 million allocated to the Memorial Bridge linking Portsmouth, New Hampshire with Kittery, Maine.

The state legislature and administration are preparing a joint study to identify a strategy for funding New Hampshire's future transportation needs, including the I-93 project. I-93 is the principal Interstate highway linking the densely populated southeast portion of the state with the greater Boston area. The highway was designed to accommodate daily traffic volumes of up to 70,000 vehicles. However population and traffic projections indicate that 140,000 motorists will use this segment of I-93 daily in 2020 when the project is scheduled for completion.