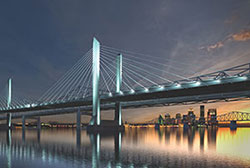 WASHINGTON - U.S. Washington - U.S. Transportation Secretary Anthony Foxx joined representatives from the Georgia Department of Transportation in Atlanta today to announce a Transportation Infrastructure Finance Innovation Act (TIFIA) loan for $275 million to build new reversible lanes along I-75 and I-575. The 29.7-mile-long project will relieve congestion along the heavily trafficked corridor during morning and evening peak periods. The loan will go toward the $833.7 million total cost of the project.

The cost of the Downtown Crossing, which Kentucky is funding, is roughly $1.3 billion, and it represents one half of the bi-state Ohio River Bridges project, which also includes the new East End Bridge, also spanning the Ohio River eight miles to the north. Indiana will finance the East End Crossing Project connecting Prospect, Ky., and Utica, Ind., which is also estimated to cost $1.3 billion.