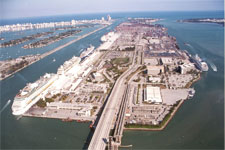 WASHINGTON, D.C. 10/15/09 - Congestion relief and improved traffic safety are one step closer to reality in the downtown Miami area as a result of the U.S. Department of Transportation's $341 million loan approval to build the Port of Miami Tunnel, giving cargo trucks and tourist buses better access to the port, U.S. Transportation Secretary Ray LaHood announced today.

"This tunnel will create a vital transportation link that will improve safety and reduce traffic congestion in the Miami area," Secretary LaHood said. "It will also save money for millions of drivers because they will be spending less time on congested roads."

The tunnel will serve as a direct connector to and from the Port of Miami. As a result, this tunnel will remove thousands of commercial trucks and cruise line buses from local streets, improving traffic flow and safety for vehicles and pedestrians in Miami's busy city center. The planned tunnel will link the port to the widened MacArthur Causeway (State Road A1A) and to I-395. The entire tunnel project will be 3.6 miles in length with two lanes in each direction.

"Transportation infrastructure is the foundation for commercial opportunity and a thriving economy," Federal Highway Administrator Victor Mendez said. "This project is a great example of how these advances will improve everyday life for motorists and pedestrians in Miami."

Improved access will help the Port of Miami, a center for trade with Latin America and the Caribbean and a major tourist destination, stay competitive and handle the projected growth of cargo and cruise operations. The facility is currently the largest container port in Florida and the ninth largest in the United States, handling containers worth $50 billion annually in trade merchandise. It is also a leading economic generator in Miami-Dade County for jobs and revenue.

The Miami Access Tunnel, a group of private companies, will receive the $341 million loan under the Department's Transportation Infrastructure Finance and Innovation Act (TIFIA) loan program to build and operate the tunnel in partnership with the Florida Department of Transportation. The loan will go towards the total project cost of more than $1 billion.