Two WSDOT fully assembled welded tubular trusses for the SR 104 Hood Canal Floating Bridge were moved with SPMTs from the Oregon Iron Works fabrication plant in Vancouver, Washington onto barges in March 2009 by Bigge Crane & Rigging under contract with Kiewit-General Construction Company. The tubular trusses act as the transition spans between the floating bridge and the fixed piers at each end of the bridge. In early March SPMTs rolled the first truss onto an ocean-going barge, where the truss was jacked up and set on temporary supports; the barge with truss was then towed 350 miles to the Hood Canal bridge site within the Puget Sound.

In May-June 2009 the trusses were erected with derrick cranes during a 5-week full closure of the Hood Canal Floating Bridge. 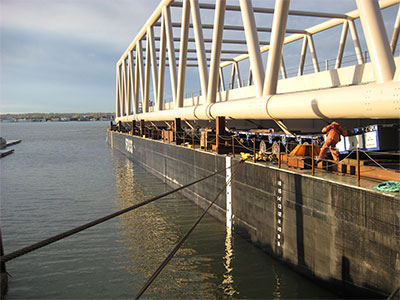