Right-of-way (ROW) Use Agreements are a form of value capture that involves the sale or lease of development above, below, or adjacent to transportation ROWs or real properties. 1 In active real estate markets, development rights are often transferred from historic properties to nearby properties. This practice can also be applied with highway or transit ROWs. When this is the case, new developments are often built on platforms erected above the highway or transit facility or in caverns excavated below them. While there is added cost in making these preparations, ROW Use Agreements associated with transit or highway facilities are often attractive to investors because they enable the construction of new development in prime, center city locations without demolishing other properties or displacing current residents. These opportunities create new development sites in urban cores in locations that would not otherwise be able to support new construction. 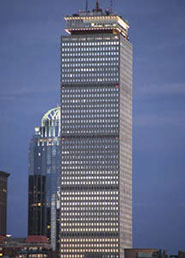 The Prudential Center in Boston, Massachusetts

Highway and transit agencies in the United States have used four models for extracting value from ROW Use Agreements: 2

Bonds may be required to protect the public agency in the event that the private sector investor fails to complete or abandons the improvement.

The amount of built space that can be constructed on a ROW Use Agreement parcel is determined by the site's zoning designation. Zoning designations identify both the type of development that is permissible to construct and the amount of space that can be developed using a floor area ration (FAR) designation. The FAR is the ratio of total amount of allowed built floor area to the square footage of the parcel. When the floor area built on a parcel is less that the maximum permitted, the unused floor area may be transferred to nearby parcels through ROW Use Agreements. Many cities allow development rights to be transferred from smaller land mark properties to nearby parcels, thereby increasing the gross floor area that may be built there under the zoning code. 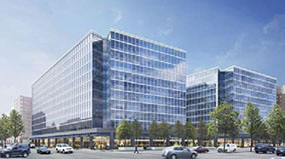 With development rights projects above highway ROWs, the full FAR is available for transfer to the development partner, as there is no preexisting built space above the site. This may not be the case with air rights projects associated with transit stations where the development may occur directly above the transit station or on nearby parcels. In some situations, there may be no existing zoning designations for transportation rights-of-way. In this case, the site first needs to be zoned in order for the development to take place. Larger projects may also involve site development agreements where the local jurisdiction may agree to alter preexisting zoning designations in order to allow the proposed development project to occur. ROW Use Agreement projects are also helpful to local jurisdictions in that they enable private development that would not otherwise occur, thereby increasing local tax rolls.

The Prudential Center in Boston, Massachusetts is one of the earliest and largest ROW Use Agreement projects above an Interstate highway. This mixed use development with a 750 foot office tower and residential and commercial space was built above an exit ramp from Boston Extension of the Massachusetts Turnpike in 1957 at a cost of $200 million. Other notable air rights projects have been built above I-5 in Seattle, I-35 in Duluth, Minnesota, I-670 in Columbus, Ohio, and the FDR Drive in New York City. 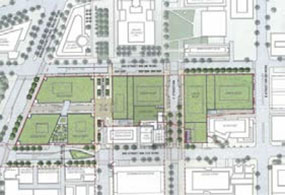 I-395 ROW Use Agreement Development

The Capitol Crossing project is an infill ROW Use Agreement development project that is being constructed above a recessed section of I-395 in the District of Columbia between E Street and Massachusetts Avenue and 2nd and 3rd Streets NW near the U.S. Capitol. The $1.3 billion project will involve the construction of 2.2 million square feet of space on a platform to be installed above the recessed section of I-395. The seven-acre site extends across three city blocks and is the largest undeveloped tract in downtown Washington, D.C. The construction program will include four office buildings with ground level retail, parking, and one residential building. 3

The idea of decking over I-395 dates back to 1989, but took over two decades to coalesce. 4 The District Department of Transportation (DDOT) and the Federal Highway Administration initiated an environmental assessment of the project in 2001 and gained a Finding of No Significant Impact the following year. The project has also gained the approval of the District of Columbia Zoning Commission. DDOT has awarded the rights to develop the project to Property Group Partners (PGP). PGP paid the District of Columbia $11 million at the time of closing and will make additional payments totaling up to $109 million as the project is implemented. 5 The project will re-connect F and G streets, which are currently severed by the highway between E Street and Massachusetts Avenue.

In March 2013, the Massachusetts Department of Transportation (MassDOT) designated ADG Scotia II LLC as the developer of two ROW Use Agreement parcels located above the Massachusetts Turnpike (I-90) at the Boylston Street intersection in the Back Bay section of Boston. ADG Scotia has proposed to deck over the parcels and will build a 400-foot hotel and residential tower with two floors of retail on one of the sites. The second will house a mid-rise residential building straddling the turnpike which will also provide two floors of ground level retail. Together, the two sites will include a 270-room hotel, 230 housing units, and 50,000 square feet of retail space to be built at a cost of 360 million. 6

MassDOT will execute a 99-year lease agreement with ADG Scotia and the company will make upfront payments in early in the lease period, as well as annual rent payments. Together the payments will provide MassDOT with a present value of $18.5 million in rent for the two parcels in the form of fixed payments early in the lease period combined with annual rent payments. 7 MassDOT began the procurement process in 2008, but put the project on hold due to the financial crisis. The project was reinitiated in 2011 and was procured through a transparent process with significant involvement by the Boston Redevelopment Authority, a citizens' advisory committee, and members of the public and the Back Bay neighborhood.

In September 2014, MassDOT and the Massachusetts Bay Transit Authority (MBTA) issued a request for proposals seeking a development partner to implement a ROW Use Agreement project on Parcel 13 which is located above the Massachusetts Turnpike and the MBTA Hynes Station, across Boylston Street from Parcels 12 and 15. 8

1 Part 710 of Title 23 (23 CRF 710) ensures the prudent use of Federal funds in the acquisition, management and disposal of real property and requires that private developers pay fair market value to obtain air rights.

ROW Use Agreements involve the sale or lease of development rights above, below, or adjacent to highway alignments and transit facilities.

The amount of built space that can be constructed on a ROW Use Agreement parcel is determined by the site's zoning designation.

While ROW Use Agreement projects have the added cost of decking over highways or excavating below transit stations, they are attractive to developers as they enable construction in prime center city locations without demolishing or displacing other properties.

ROW Use Agreement projects involving highway or transit facilities create development sites in urban cores in locations that would not otherwise be able to support new construction.