Imagine you’re a public works inspector whose job is to check on the condition of culverts. The only way to see inside those culverts is to crawl in with a flashlight. If you’re lucky, the diameter is large enough to get through on your knees. Otherwise, you’re forced to slide in on your belly and roll onto your back. The bottom is wet and often covered in layers of mud.

Senior transportation specialist Jeff Busch doesn’t have to imagine any of that because it’s his reality—at least it was before his resourcefulness led him to a brilliant new solution. Until recently, every time Busch and his fellow Olmsted County, Minnesota, inspectors checked one of 1,600 culverts after a flooding event or before a repair project, they were confronted with uncomfortable, unsanitary, and potentially unsafe conditions.

“If something goes wrong, you’re stuck in that confined space,” says Busch. “It’s an emergency situation.”

The possibility of coming face to face with a rodent or snake provided even more motivation to find an alternative inspection method.

For about two years, the five Olmsted inspectors and their supervisor, Scott Holmes, talked about how they could create a remote inspection system. Busch knew he wanted to design a system without complex wiring, servos (a power-driven mechanism that supplements the primary control), or the need to maintain a Wi-Fi signal. While the team members originally considered using a remotecontrol car to move a camera through the culvert, Busch ultimately led them to the original concept of a camera on a sled.

As a lifelong tinkerer with a childhood habit of taking toys apart to “make them better,” innovative thinking comes naturally to Busch. Presented with this challenge, his gears couldn’t help but turn: If they integrated a 360-degree action camera in their design, they could easily view a culvert from every angle. Plus, he realized most of the models available were waterproof—perfect for their purposes. Applying additional criteria of short focal length, small size, large memory, and viewing and editing software to his search, he found the ideal 360-degree action camera and a tablet that enables the remote use of a live feed.

Busch, however, prefers to review footage back in the office later, finding that immediate answers are not essential, and recordings can be saved as part of the inspection.

To make a model of the sled platform he envisioned for the action camera, he headed for his son’s creative construction set for kids—and it was that prototype composed of little plastic rods and connectors that Busch pitched to Olmsted’s county engineer, Kaye Bieniek, getting her support.

Next, he needed to find a way to move the camera through the culvert. The perfect ingredient came in the form of 4 mm fiberglass fish tape, typically used by electricians to route new wiring, which could be pushed through the pipe and locked into the sled when it got to the other side. A toilet tank float was ideal at the end of the fish tape to help it skip through the pipe without getting stuck.

Busch has been stopped only twice after sending his sled through roughly 120 culverts. And despite pulling his sled over rocks, rusted metal, and even a deer skull, there hasn’t been a single flip-over or wreck. Pretty impressive for something composed of a PVC pipe sled, pool noodle side arms for buoyancy, rechargeable bike lights to illuminate the action camera, a flashing pet collar for visual location, a toilet tank float, and a kite reel that operates as a “positioning yo-yo” or recovery line.

“I’ve never built anything like this,” Busch says. “I just kind of looked for objects that would fit my needs and saw what would work best.”

Before his innovation, the smallest culvert inspectors could enter was 24 inches—and they couldn’t get quality visual documentation for their evaluations. Now, inspectors can obtain clear images in culverts as small as 15 inches. The new system has already provided maintenance crews with better data; in one instance, preventing a road from being torn up when Busch’s video revealed that only a patch was required.

“You can look at video multiple times and get a different view every time,” Busch reports. He was initially concerned about the lens being too close to the pipe for clear images, but that hasn’t been an issue. He does slow videos down to half speed for better resolution, however.

Holmes is impressed with how the 360-degree action camera on skids has transformed their work, not to mention Busch’s ingenuity. “It’s nice having an innovator like Jeff,” he says. “You can go back and look at all these still pictures around the whole culvert—around the top, around the sides, around the bottom. You can spend a half-hour looking at it in the office, and he only ran it through there for a minute.”

Busch says he was going for “cheap but effective,” which he accomplished with his final tally of $1,240, compared to commercial pipe inspection crawler robots that can cost as much as $10,000. The bulk of that cost went toward the 360-degree action camera ($600) and tablet ($360).

Busch has already modified his original design and is now using a third, more compact version featuring even greater stability and flotation capabilities. He also plans to use the 360-degree action camera to get a better view of trouble spots in other areas of his work, including construction and bridge inspections. Culverts are only the beginning.

“I’m definitely inspired to do more,” he says. 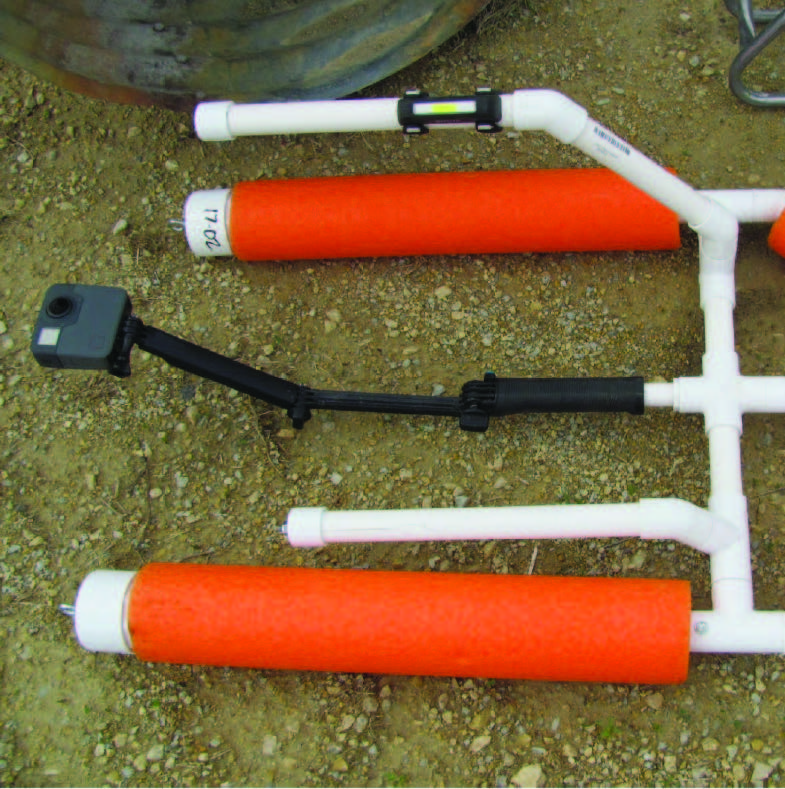