“I usually say if you don’t find anything to do, you’re not looking hard enough,” remarked Matthew VanLew. As Roadmaster of East Brandywine Township in Chester County, Pennsylvania, VanLew doesn’t believe in idle hands. The former carpenter oversees 38 miles of roads and helps maintain a 19,000-square-foot municipal building. There are endless acres of grass to cut and trees to clear, and always something to repair.

VanLew often reminds his crew of five that if they’re faced with a job they don’t feel comfortable doing, they shouldn’t. Many of the team’s morning meetings conclude with him reminding them, “Be safe out there.”

This level of support makes public works employees like Derrick Claas and Kyle Mortzfield feel empowered when exercising their problem-solving muscles around the garage. They freely share their practical yet creative ideas, especially when it comes to finding ways to save space.

No stranger to the creative process himself, especially when it comes to working with wood, VanLew says “sawdust is in our blood.”

East Brandywine Township’s facility is filled to capacity with equipment and supplies inside and outside of the building. For most equipment, indoor storage is preferred to protect the investment. However, space is at a premium, and oversized equipment, such as salt spreaders weighing 300 to 500 pounds, pose the biggest storage challenge. Couple that with the need for quick and easy access during the winter and you soon find yourself out of space.

“They would all be spread out on the floor,” says Mortzfield. “To get to them, we would have to move a truck and a couple of plows because we don’t really use them a whole lot.”

Not only were the spreaders tucked away on the front side of the garage, but each also required a backhoe to lift it onto the back of a truck outside—and the help of two to three people. To get the backhoe into the garage, many other pieces of equipment had to be moved out of the way.

Claas and Mortzfield knew there must be a smarter way to organize and move the spreaders, so the duo started brainstorming. Drawing on previous project experience, such as mounting a wheel on a concrete mixer to make it easier to transport, they arrived at the perfect solution: a self-contained unit on wheels that could be operated by a single person.

Realizing they could easily repurpose lumber that had been reclaimed from an old structure, they took dimensions of the spreaders and started building. Casters and hardware were the only items that needed to be purchased for the project, resulting in a total cost of $50.

The biggest challenge was figuring out how to stack the spreaders so the bottom row had access, but they solved this problem with an ingenious two-piece, double-decker design. Perched on wheels, the first layer holds two spreaders, while the cradle above them holds two more.

At a moment’s notice, the new 5 L x 9 W x 4 H foot rack could be wheeled out the door to a chain hoist the township garage salvaged from an old pump station. Once hooked to the spreader, the hoist can raise and lower it so it lines up perfectly with a dump truck. The same person who wheeled the rack out can then position the four pins necessary to finish mounting the spreader into place.

“It makes it a one-man operation and safer than using the backhoe,” says VanLew of the project’s benefits. And not only is it safer but it’s also more efficient.

According to Claas, “You can get a spreader onto a truck on your own probably in 10 to 15 minutes. It would probably take the same amount of time using the backhoe, but that was also with two or three people doing it. You save 20 minutes per spreader because those other two employees could be doing something else [like loading the truck with salt].”

“Plus,” VanLew continues, “during snow or bad weather, we have to pre-salt the roads as quickly as we can—or maybe we’re called in the middle of the night and it takes about a half-hour to get to the township garage. … By putting the spreader on one truck within 10 minutes, that driver does not have to wait to help with the other trucks. It saves a lot of time and it gets us on the road a lot quicker.”

This time- and space-saving innovation led Claas and Mortzfield to receive recognition at an East Brandywine Township Board of Supervisors meeting, and they’ve started to share their idea with public works colleagues in the area.

VanLew is proud of their innovation. “To see what they did and what they accomplished, and how it’s really benefited the township and our crew, is pretty amazing.”

Asked what’s next for the duo, VanLew laughs and says, “I can see their wheels spinning right now.” 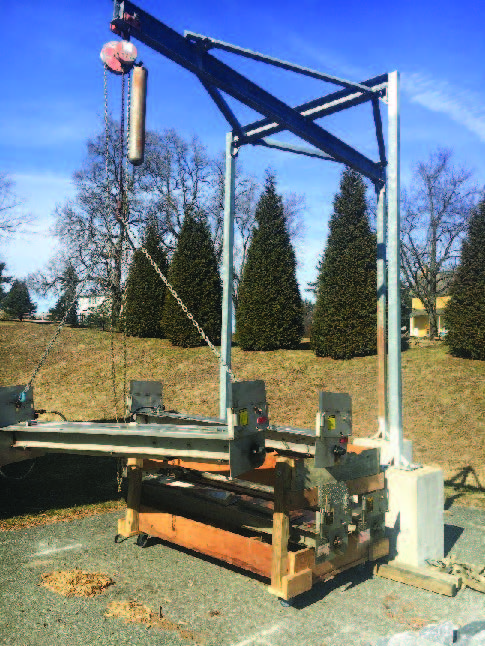