An Integrated Approach to Sustainable Roadside Design and Restoration

There are many chemicals which are used to reduce suspended sediment in water. Each has its own benefits, costs, and risks for a particular application. In most cases, simple "shake" or batch tests are conducted to determine which chemical or combination of chemicals is most effective. Using any of these in CTS may be subject to local, state, or federal requirements for maximum use rates, aquatic toxicity data, or effluent toxicity testing. These requirements should be identified prior to selecting which flocculant to use on the site. The following are chemicals which have been used or tested in CTS for stormwater or similar environmental applications. The list is not intended to be exhaustive but to provide examples of the most common options in CTS. The list is separated into two sections: one for polymers and one for other additives.

Chitosan - A cationic polymer made from chitin, which is derived from crab, shrimp, and other crustacean shells, can be used in CTS. Although a cationic polymer such as chitosan can be toxic to fish (as the gills of a fi sh have a negative charge), free polymer is unlikely to be released through a CTS described herein because it binds quickly to the suspended sediment in the untreated runoff. Even if free chitosan were released to surface water, it would immediately bind to any sediment in the surface water further decreasing the likelihood of adversely affecting aquatic life. In the state of Washington, where chitosan has been used widely on all types of construction projects since 2000, including DOT projects, there have been no incidences of harm to the environment.

Polyacrylamide (PAM) - A synthetic polymer, PAM is used to describe a wide variety of chemicals based on the acrylamide unit. When linked in long chains, some portion of the acrylamide units can be modified to result in a net positive, neutral, or negative charge on the PAM molecule. The positively charged, or cationic, PAMs are often not used for turbidity control because they can be toxic to fi sh and other aquatic organisms if they enter water bodies in sufficient concentrations. As is the case with chitosan, this eff ect has been shown to be greatly reduced in turbid water. The negatively charged, or anionic, PAMs are much less toxic to aquatic organisms and are widely used for erosion control in furrow irrigation agriculture. PAMs are also used in erosion control products. The reader should assume that all references to "PAM" in this document are to the anionic forms. In addition, only food-grade PAM is used because it contains very low (<0.05%) amounts of free acrylamide, which can be toxic but only at much higher concentrations.

DADMAC - Diallyldimethyl ammonium chloride is a cationic monomer which can bind the negatively charged sediment particles into flocs which can settle. This chemical can be polymerized into long-chain molecules commonly referred to as "poly-DADMAC." DADMAC exhibits a strong aquatic toxicity and its use should be carefully considered against other effective options that are significantly less toxic.

Gypsum - A naturally occurring mineral, gypsum is deposited widely around the earth. It is made up of calcium sulfate and water in the formula Ca(SO4)•2(H2O).

Alum - An aluminum sulfate material (Al2(SO4)3•16H2O), alum can be used for water clarification. It is often more efficient than gypsum but can acidify treated water if overdosed. It is widely used in the water treatment industry.

Appendix B: Examples of Chemical Treatment Systems and Costs 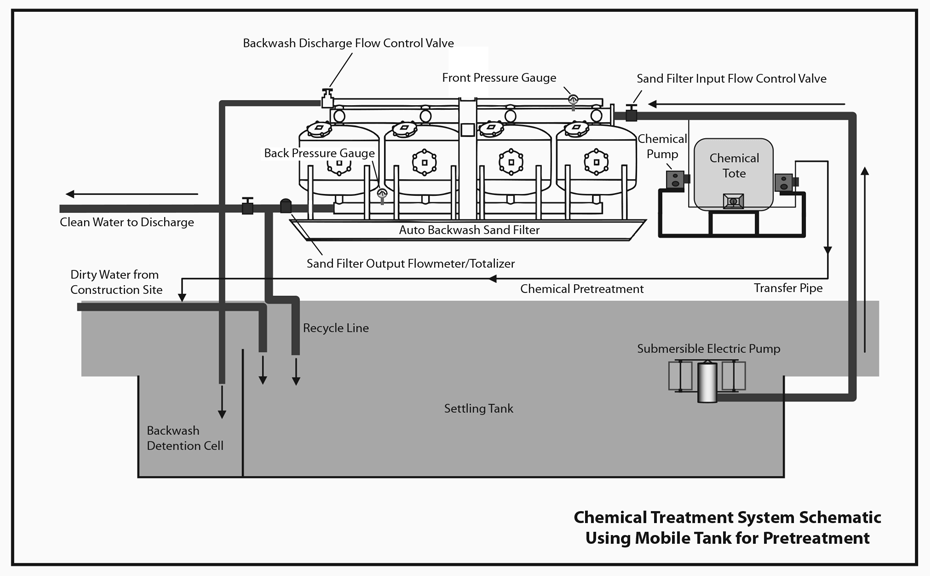 Pretreatment Using a Mobile Tank and the Additional Pump Adds Considerable Cost to the Treatment System. 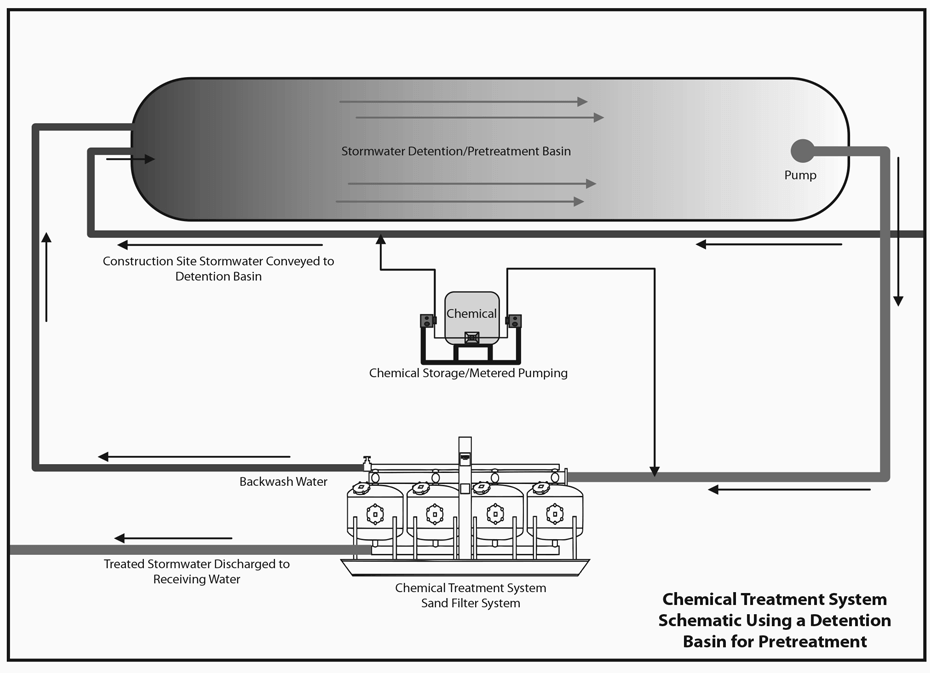 Appendix B: Examples of Chemical Treatment Systems and Costs

The cost to treat sediment-contaminated stormwater or dewatering water is directly related to the quantity of water treated. It is easy to see that if there was no precipitation or dewatering requiring treatment the total cost of this system would simply be $17,300 per month. There would be no labor or fuel costs and minimal reporting costs. But since this is not a practical expectation, three hypothetical use levels and calculated costs based on these assumptions are presented. Assume that on average the chitosan dose rate is 2 mg/L (1 mg/L for pretreatment and 1 mg/L for sand filtration). The use levels are:

5. Heavy use is most often associated with continuous dewatering activities, dredging, and unusually heavy or prolonged precipitation events. 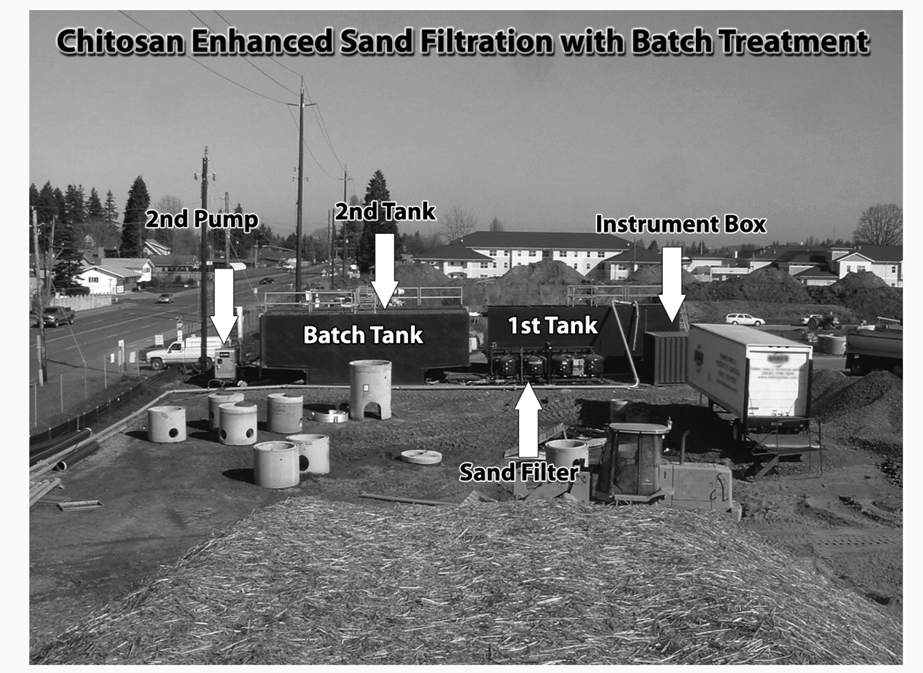 Example Schematic for Dosing Flocculants at the Dewatering Pump Intake 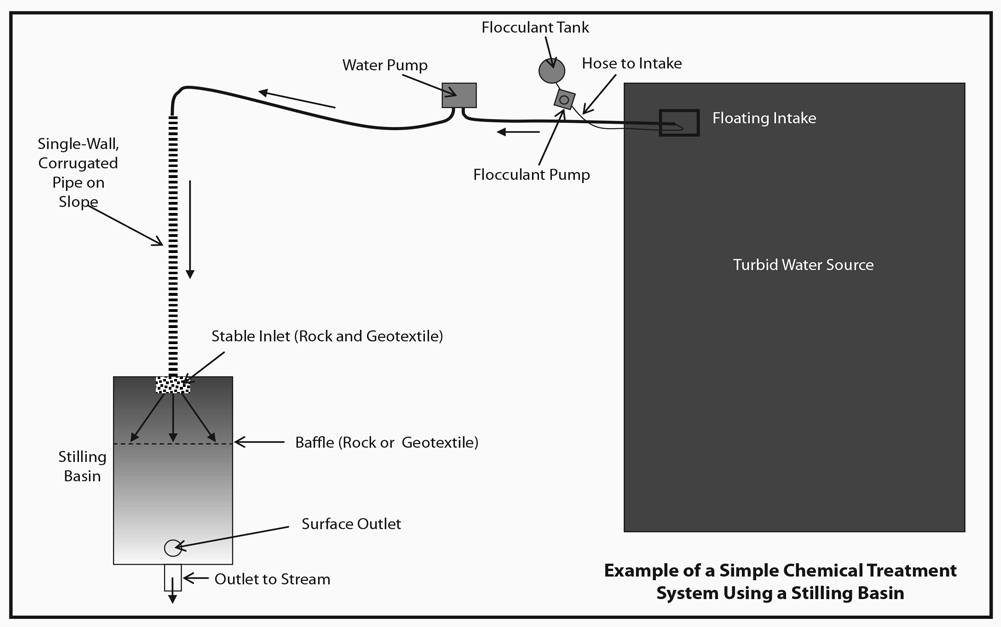 Example of Chemically Treated Discharge Water Being Mixed in a Corrugated Pipe Before Discharge into a Stilling Basin. 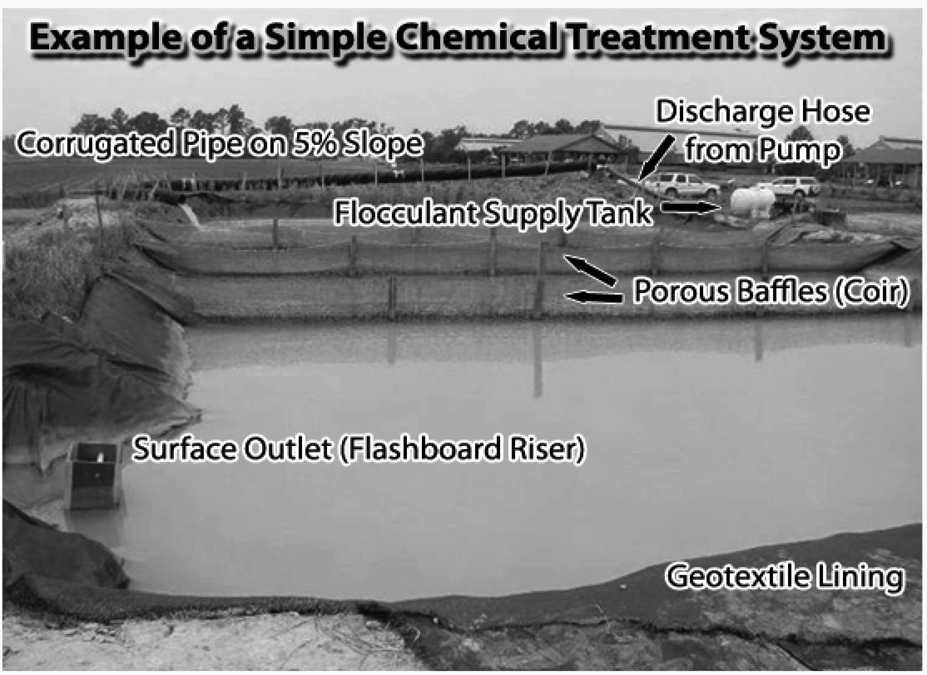 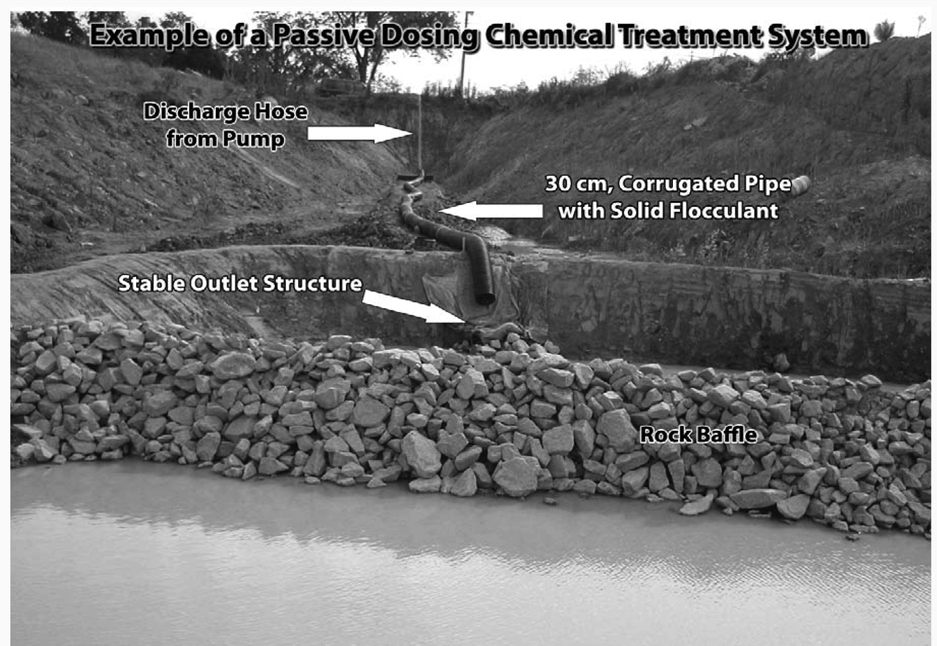 Typical Layout of a Chemical Treatment System on a Construction Site. 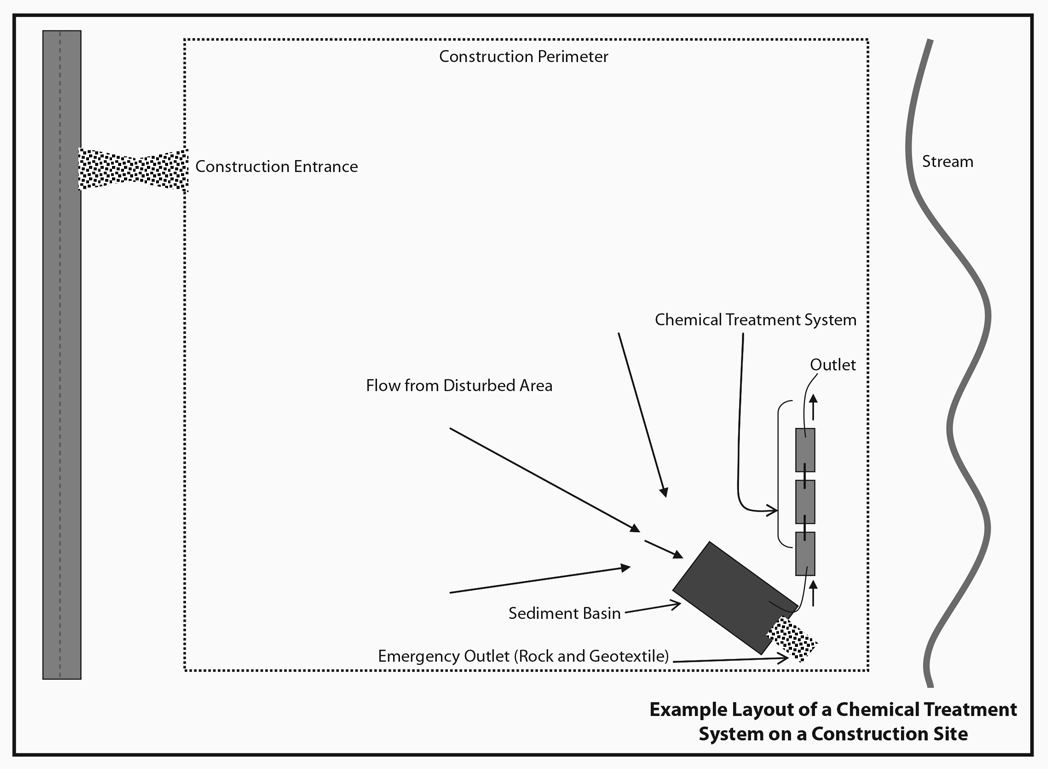